Let’s be honest. Seeing the northern lights are on most of our bucket lists for Sweden. For me, seeing the Aurora borealis was VERY important. Along with other things like seeing a moose in the wild, reading Pippi Långstrump and many other things. Technically, you can see the northern lights also in South Sweden. But I quite quickly realized that the North of Sweden is much better for this. And there’s the catch. The risk of going up all the way to Lappland, and then be unlucky. Either because it’s cloudy, or simply because there are no Northern lights.

This happened to a couple of my friends. They went to Lappland to see the Northern lights and didn’t see them. Hence, they came back disappointed from there trip.

Go for another reason than the northern lights

How can you solve this issue? You go for another reason to Lappland!
I decided that I wanted to go skiing in Lappland. And seeing the Northern lights would be a bonus. The main idea was not to have them as the sole reason for the trip. Hence, if I would miss them, the vacation would not end in disappointment.

But why did I choose to go skiing in Lappland? You might think that it’s far away and that there would be many other closer ski resorts in Sweden. Growing up in the middle of the Alps, with a ski resort right outside my parents’ house, I skied a lot. For just “normal” downhill skiing, I can visit my parents. It takes the same time to fly to the Alps as it takes to get to any bigger ski resort in Sweden. Therefore, I needed something extra. And I found it in the form of Riksgränsen. Riksgränsen is, as the name implied, directly at the border. The border between Sweden and Norway. Most importantly, they are specializing in off-piste skiing. So that was reason enough for me!

I found my main reason to go to Lappland. From there, the rest of the trip was planned around this primary cause. If you look at a map, you will realize that Riksgränsen is high in the north. It’s roughly on the hight of Kiruna and Abisko (the places famous to watch the northern lights). And then all the way towards the western border of the country. We decided to have Riksgränsen as our final destination. But do it according to this old saying. The way is the goal. That leads us to the following outline of the trip: Kiruna – Abisko – Björkliden – Riksgränsen.

We flew to Kiruna from Malmö via Stockholm. Already during the flight, you see how the landscape is changing. Suddenly, everything is white and hilly! The airport in Kiruna is quite small, and there is only one landing strip. And the airport itself is little more than just a house along this airstrip. Kiruna is surprisingly big, with more than 20’000 people living there. You have maybe also heard about Kiruna from another context than tourism. It is a mining city, and because of the elaborate mining, they are moving the entire city to prevent its collapse! Many people visiting Lappland stay only in Kiruna. Hence, there are plenty of tourist activities to do.

We decided to only stay one night here, which I think is enough to explore the city and surroundings. Kiruna has an impressive church, which counts as one of the biggest wooden buildings in Sweden. The second day we used to explore the nearby Ice Hotel in Jukkasjärvi. You could sleep there of course, but as the Hotel is open to visitors during the day, you can still see the rooms without sleeping there. Each room is sculptured in ice by a different artist, and a big part of the hotel is totally new each year. Because the hotel melts in summer and disappears!

The best way to travel towards the west is the train. Using the train is very convenient, but the best part is the scenic landscape. We even saw reindeers along the way. (Another item on my bucket list checked!). Our next stop was Abisko. Abisko is known as one of the best places to watch the northern lights. This is because of its dry climate that makes the sky very clear. We stayed also one night here. Equipped with snowshoes, we did a tour that took us to the starting point of Kungsleden and up a hill. From here we had a wonderful view towards Lapporten and a U-shaped valley just outside the national park. In the evening we eat a reindeer burger, next thing on my bucket list!

We continued our trip towards Riksgränsen with the train. There was one more stop before our final destination, which was Björkliden. This is a tiny place along the rail train, and it has a ski resort! I finally got to do my first downhill skiing in Sweden. It’s more of a family ski resort, and nothing very special. However, also from here you have a wonderful view of Lapporten. The resort has an extremely cosy bar with a fireplace where you can enjoy the view and warm up again.

With all our stops, it took us several days to get to our final destination, Riksgränsen. Riksgränsen has one hotel/hostel, which is located right next to the train station. Ahead of us, we had 4 days of skiing. Riksgränsen is a large ski resort, and as earlier mentioned, it’s specialized on off-piste skiing.
So what that this mean? There are many lifts everywhere, but then the majority of “pistes” are not prepared, so they are powder snow. In comparison to the alps, the hills are not as steep, and the elevation is much lower. But we skied 4 days in almost untouched powder snow, so I had the time of my life! And hot chocolate with mintu tastes much better after a day skiing in Lappland than it ever had in grey Skåne!

So, how about the Northern Lights?

We went to Lappland for skiing, and I was extremely happy with our vacation. As we planned on doing skiing, we went over Easter (End March/beginning April). The reason for this is that by then there is a decent amount of hours where it is daylight, and it is not AS cold as in January. But how was it with the northern lights? The nights are still long, and chances are good to see northern lights. We used an app to track the activities of the Aurelia Borealis. And for all of the days, there should have been high chances to see them. On the first day in Kiruna, I was constantly checking the sky for signs of northern lights. Right before we went to bed, there was something in the sky. So we went outside, and indeed it was small northern lights. Despite being only small northern lights, they were magnificent. For tips on seeing the northern lights, head over to this blog post of my fellow Newbie blogger Akanksha.

From then onwards, I was checking the sky every night, but for the rest of the trip, the sky was always cloudy. So we never saw them again. I was super happy that I could tick this item off my bucket list. But it also confirmed what a lot of people said: you need to be extremely lucky, especially if you only go a few days. We were lucky one night of our one-and-a-half week in Lappland!

Lappland has so much more to offer than the northern lights! 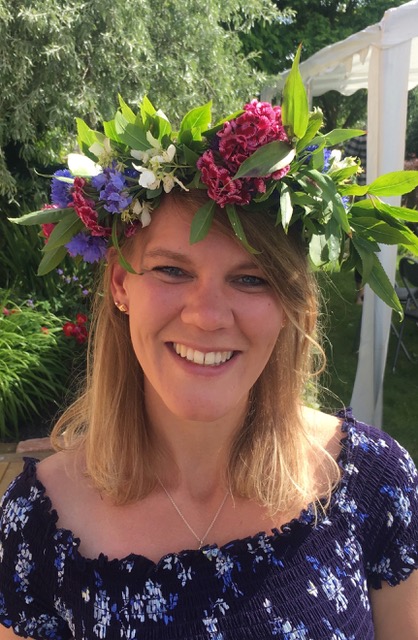 My name is Michaela and I grew up surrounded by mountains in Switzerland. When I moved to flat Lund to do my Ph.D., I initially thought it would only be for the 4 years that it takes to obtain this degree. Of course, life had other plans, and falling in love with a Swede changed my life completely. I am passionate about science, outdoor activities, and balancing multicultural traditions.