Have you heard it yet?  The ubiquitous phrase so popular in Sweden when the weather gods do their best to keep everyone indoors? Det finns inget dåligt väder, bara dåliga kläder. There’s no bad weather, only bad clothing.

Never did that turn out to be truer for me, previously a self confessed devotee of all things indoors, than when my children’s local open preschool advertised a BBQ last year.  At the beginning of March.  When the snow was still thick on the ground.  I was confused.  Was it a typo? Had they put up the wrong poster?

They wouldn’t possibly be having a BBQ in THIS weather? Would they….

They were.  And it was fantastic.  Fuss free and low key, a classic Swedish BBQ with grilled sausage, buns, ketchup and mustard.  All served up as though we were soaking up the sun outside the stuga in August.

After that eye-opening occasion, I thought that nothing about Sweden’s outdoor life (known in Swedish as friluftsliv) would surprise me.

I had grilled korv in sub zero temperatures,  after all.  Surely that was the strangest thing I would do during my time in Sweden?

Apparently not.  Because it turns out that in Sweden, including up in beautiful Dalarna (where we spent a blissful fortnight pretending the wonderful rented lakeside summer stuga was really our own) you can ride a dressin.

I had never even heard of dressins before the moment I spotted them in the tourist brochure, and the sheer novelty value was enough to persuade us that we should drop our plans and book a day’s tour. 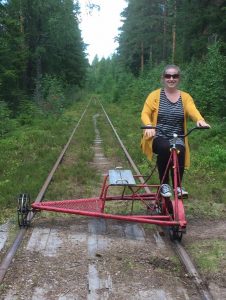 Dressins are small (but heavy) pedal powered vehicles which can be cycled on railway tracks.  In their heyday, they were used by railway builders and maintenance workers to efficiently transport people and equipment up and down the tracks.  Developed in the early to mid 1800s, dressins were in active use in Sweden until the middle of the twentieth century, and those which remain have since been given a new lease of life as visitor attractions on disused rail tracks all over the country.

It must have been clear when we booked that we were dressin newbies. We had a lot of questions.

Is there somewhere for a three year old to sit? Can we take a baby in a backpack.  What do we do if we meet another dressin coming the other way? Where can we stop and grill korv along the route?!

Room for everyone on the double dressin!

But after an exhilarating and hilarious day with over 20km covered on the dressins, a picturesque lakeside picnic and even a Facebook Live stream of our escapades, we had only one question left.  Can we come again next year?

Slowly but surely, this Swedish newbie is coming to realise that Swedish outdoor life is something really quite special.

We’ve watched the midnight sun shine over Lake Törnetrask, 200km north of the Artic Circle.  Taken sleepy toddlers to the top of the Royal Mounds at Gamla Uppsala to show them the Northern Lights.  Swum in countless lakes.  Rowed to an uninhabited island and sheltered from a summer rain storm in an old abandoned farm hut.  Picked cloudberries and lingonberries by the bucketfull.  It’s safe to say we’re friluftsliv converts and we can’t wait for this summer’s suprises!

Hej! I’m Sarah.  I’m from the UK and I live in Uppsala with my husband and our two children.  I am a language teacher and freelance writer, and my husband is a researcher.  It was his work with moss (yes, moss!) which brought us to this beautiful country, and we absolutely love it here!  Highlights of our life here so far include experiencing the midnight sun in Abisko during an epic Arctic Circle roadtrip, blissful summers in Dalarna, and meeting Sweden’s Crown Princess Victoria (along with Prince William and the Duchess of Cambridge!) in Stockholm’s historic Gamla Stan.