To tell a Swede that you are not a big fan of the bun semla (semlor in plural) – might be considered sacrilegious and semlor are sold pretty much everywhere during January and February. But what is a semla, why is it such a big deal and how do you eat one? 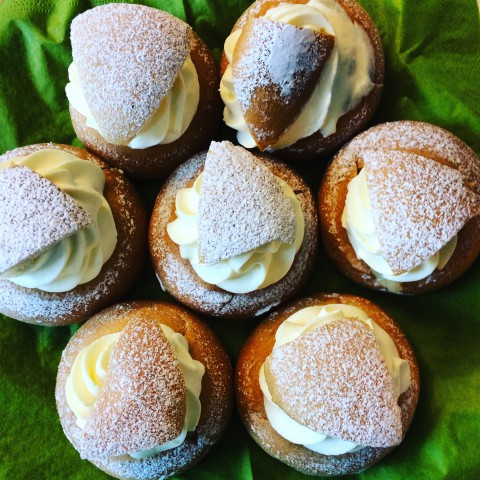 Now as many of you may have noticed, Sweden isn’t a Catholic country and when the protestant reformation came to Sweden during the 16th century spearheaded by King Gustav Vasa (an avid skier by the way), the Swedes decided there was no point in giving up on eating semlor just because they were giving up on Lent and instead turned the semla into a desert to be enjoyed between Shrove Tuesday (fettisdagen) and Easter.

But what is a semla – exactly?

A semla is simply put a small or sometimes large wheat flour bun, flavoured with cardamom and filled with almond paste and whipped cream.

The excessive eating of semlor that many enjoy today for almost two months, is a fairly modern phenomenon.

Back in the days, Jordbruksnämnden ( a section of the government) dictated when you were allowed to sell semlor and how much they should cost.

If you failed to follow these rules you could end up having to pay a hefty fine. In January 1952, the newspaper GT reported on a couple of bakers in Malmö who figured they’d get a jump start on the selling of semlor – only to have it backfire when the police came knocking. Today they selling of semlor is much less risky and you are free to enjoy them at your own time.

How to eat a semla

As you can see, there are a number of ways to eat semlor spending on your personality and relationship towards semlor.

But generally you start with the lid and use it to scoop up the mushy contents. Then you proceed with the rest of the bun.

A word of warning regarding a hetvägg. Even though you may find it delicious, try to pace yourself.

Something the Swedish Kind Adolf Fredrik failed to do. His favourite dessert was a hetvägg and on Fat Tuesday in 1771 he collapsed and died after eating a meal of lobster, caviar, sauerkraut, smoked herring, champagne and 14 servings of hetvägg. It is, however, unclear if the hetvägg was truly to blame or if a general piggishness might have had more to do with his unexpected demise.

Bake your own semla

Traditional semla, semmeltårta (cake), semmelwrap (wrap) or minisemlor (tiny semlor) – you can buy them or bake them. And if you are in the mood to bake and don’t mind practising your Swedish at the same time – you can visit the supermarket ICA’s page on all things semlor.